I have been training using H360 for almost 3 years now, and in response to a call from Susan Garrett to produce videos showing how H360 has helped us on our agility journeys, I made this wee video of our story.


It is now featured on Susan Garrett's blog in a voting contest to win some nice prizes.  If you see this post, perhaps you will consider visiting her blog and voting for me.  Many thanks. :)
http://susangarrettdogagility.com/2017/11/h360-video-contest-2017-round-one/

PS We actually won the video competition and received a lovely selection of goodies as a result.  Thank you Susan Garrett  :)

I wrote this recently after being asked to describe to club members how to make a start with distance handling.  I hope it's helpful.  Also worth checking out is the FaceBook group for Distance Handling here:  https://www.facebook.com/groups/300843699995932

There are lots of reasons:
- Because it’s cool, and worth a try
- To add more flexibility to your handling
- Because you can’t run as fast as your dog
- Because you really can’t run at all!
The emphasis you place on building distance skills will depend on how many of the above apply to you. Handling at a distance will always be riskier than conventional methods, so handlers who can move fast, usually take that option. For the rest of us distance handling is worth the time investment, because it helps us to be competitive at all.

My Thoughts on Training Distance Handling:
1.     Confidence is key!  If your dog is to race away and take obstacles on command, without you there, he needs to know you will be pleased he did.  So, reward - reward - reward – even if he takes the wrong obstacle, or turns the wrong way, reward the attempt.  This always important, but it is especially so at the start of distance training.

More than a Year!

Agility took something of a backseat for me in 2015 as my health stumbled and the exertion of agility became too much.  So it has been over a year since I last posted here.

In 2016 however, thanks to an off label drug, my health somewhat improved.  In fact, I've even stopped using the mobility scooter, and am once again walking in the ring, and "distance handling" with Finn.

I think he understands me better now too, as we are gradually collecting a few ribbons.

This was our first ever KC clear round - a Jumping round back in June at The Patch.

And at the Lisburn Show in August, we got two clear rounds in agility.  This one in G1-7:

Then in September at the Belfast DDTC show we finally managed to win our first KC Agility class!  I was so proud that he worked out what I wanted in this round - because sending him off, all on his own to those 6 weaves, was a bit of an "all or nothing" gamble. :)


Of course, we don't always get things right, so for the sake of honesty, here's a round that is perhaps more typical with things going a bit pear-shaped!

I labelled this round Ooops!


As for training, I am still following Susan Garrett on H360, and I hope that in 2017 my co-ordination will improve some, and that we can gradually become more consistent in the ring. 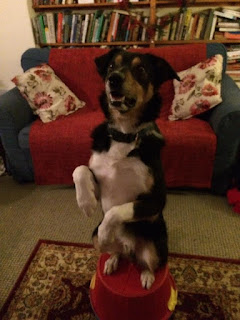 This is Finn & my first year competing in Kennel Club competitions.

We've a lot to work on still, but Finn and I have attempted two KC rounds so far: 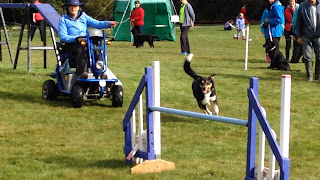 I was really pleased with this round despite the elimination at the weaves, because for the first time he didn't dash onwards and take obstacles without being sent to them.


He did a couple of spins back to me when uncertain where to go next - so I need to work on getting my directions to him more quickly and clearly.

Still not getting the weaves right, but his contacts were great, and apart from one small spin before the last jump he seemed totally clear about where to go... :)


I was also delighted with how he took the long jump - I think this is the first one he has ever encountered!


Flash Back...  June 2014 Finn's first attempt at a Jumping round at a Cooperhill Fun Day

This video shows just how far he has come in a year....  Obviously an elimination, because he doesn't follow directional cues much at all here, but I think this shows a certain raw enthusiasm.  He was very pleased with himself!


As far as Training goes:

We continue to attend club training, and I have been given fantastic support and encouragement from Castlereagh & District Dog Training Club.  Of course the fact that they have now moved their training grounds to our paddock makes it much easier for me to get out for training sessions.  No need to load the scooter into the van and travel now! 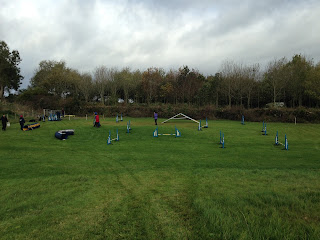 I have also joined Susan Garrett's online H360 course, and we are working our way through various exercises so that I can call clear instructions to Finn... Thing's like "Na na na" meaning to take the back of a jump and so on.  We haven't put many of these into practice in competition yet, but his skills are expanding and soon I hope to do most of his handling at a distance and using a combination of Susan's verbals, and our own quirky communication signals!


At the moment my health limits me to attempting only one competitive round a weekend, which is frustrating, but just part of having an illness like ME.  Actually, I am very grateful that my health is sufficient to allow me to do this, as many ME folk suffer to a much greater extent.
This helps explain my dilemma with doing agility: Well enough to drink coffee?

Oh and here's to my happy, willing dog who does his very best to work out what I am trying to tell him. I had no idea when I gave him his Kennel Club name, just how true it would turn out to be! xx 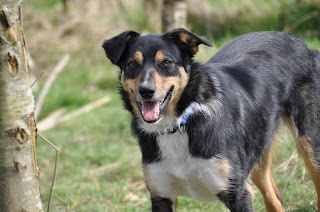 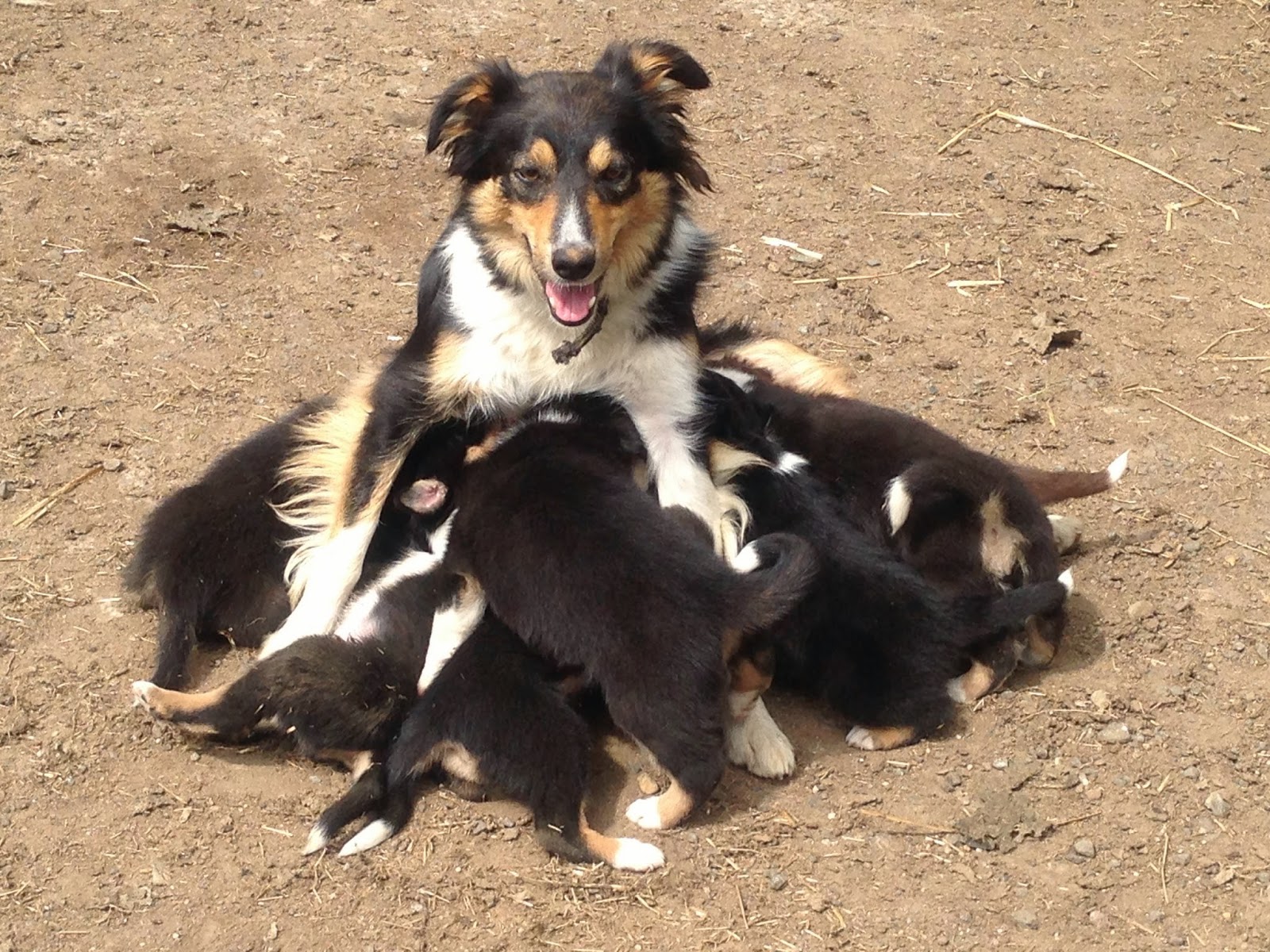 Finn's breeder sent me some photos of when Finn was a tiny pup.  I forgot about them until recently, but they are so cute and worth sharing: 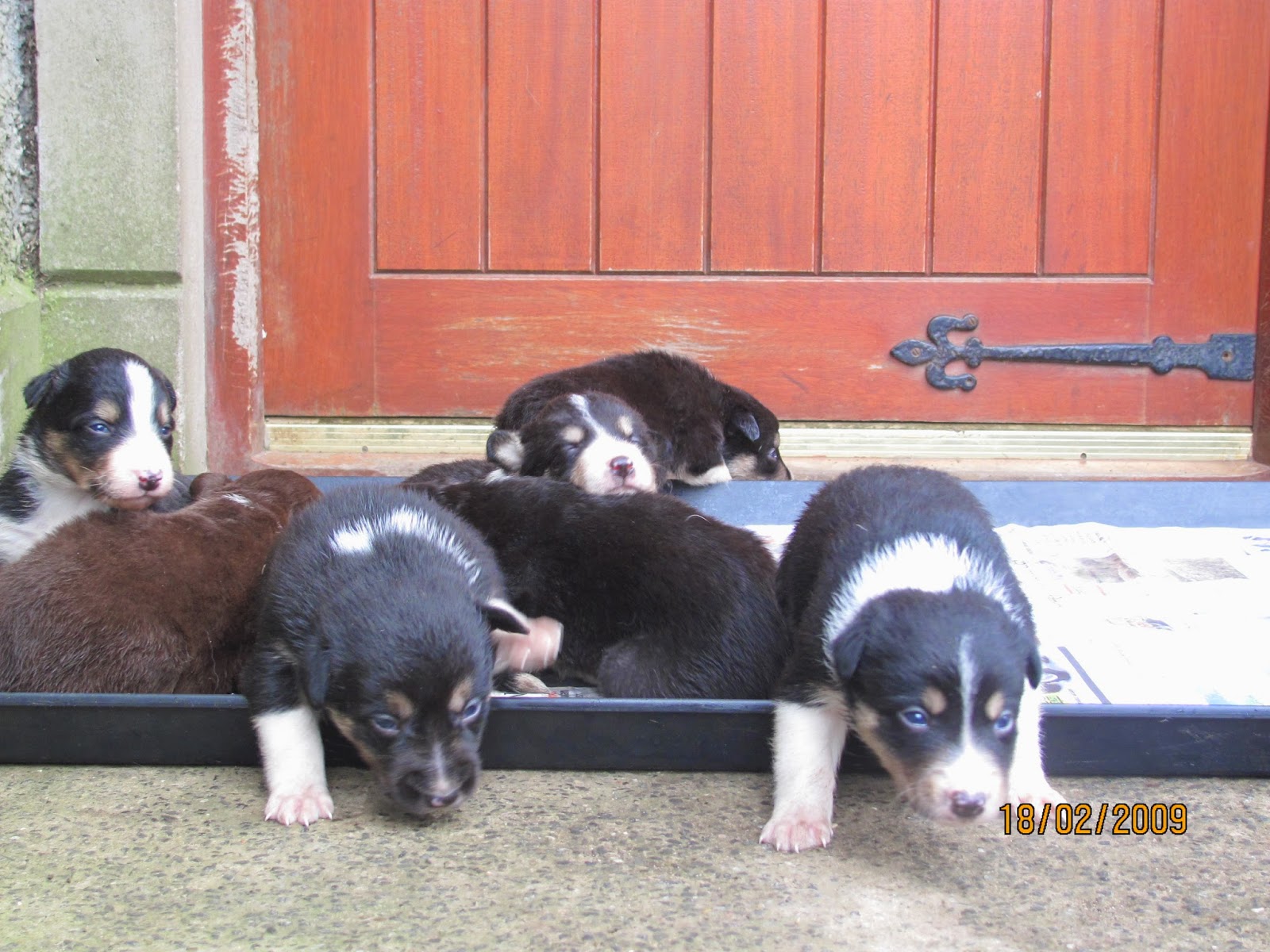 In the photo above, that's my boy on the left climbing down the step. 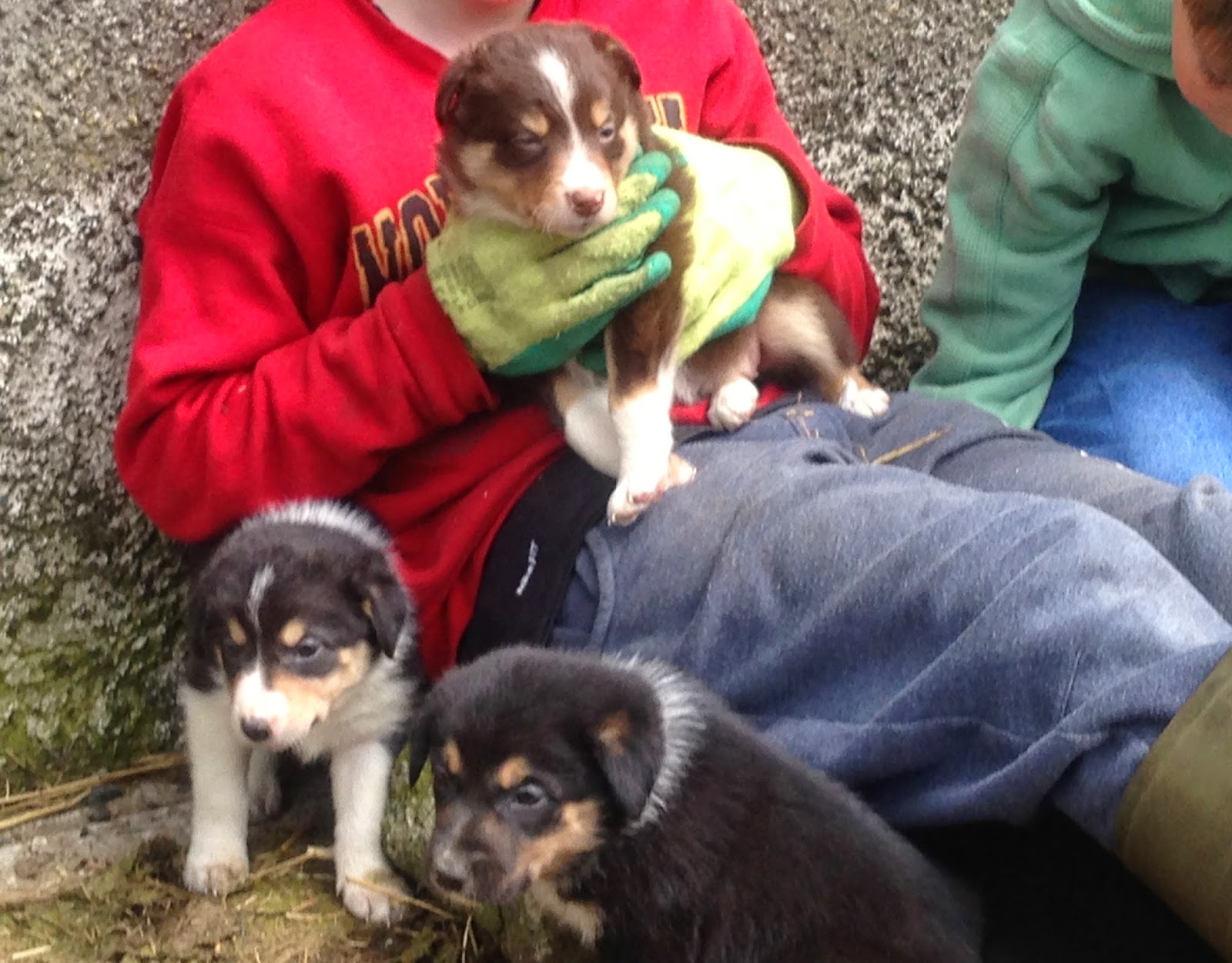 Oh and here he is again in the foreground. 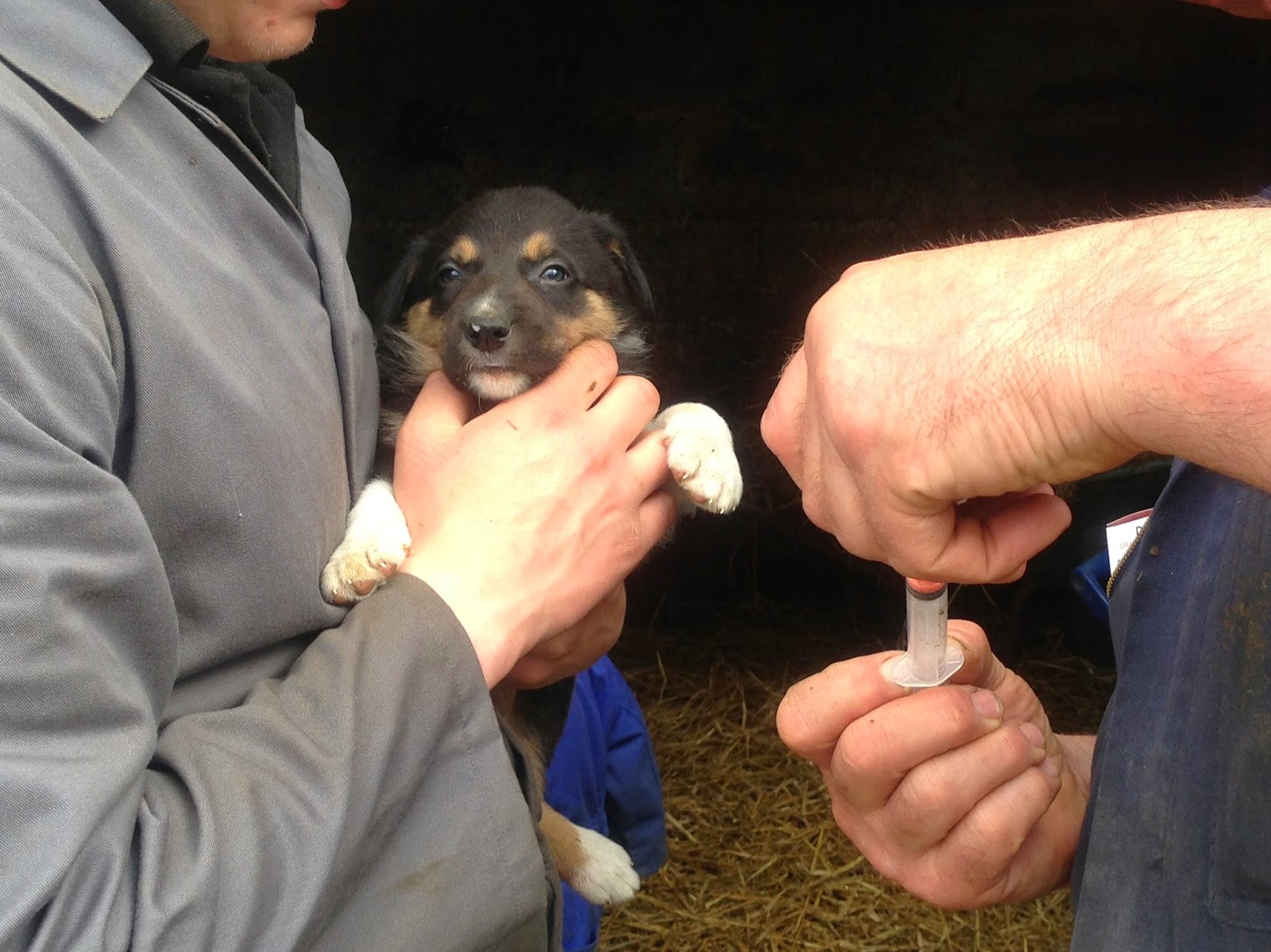 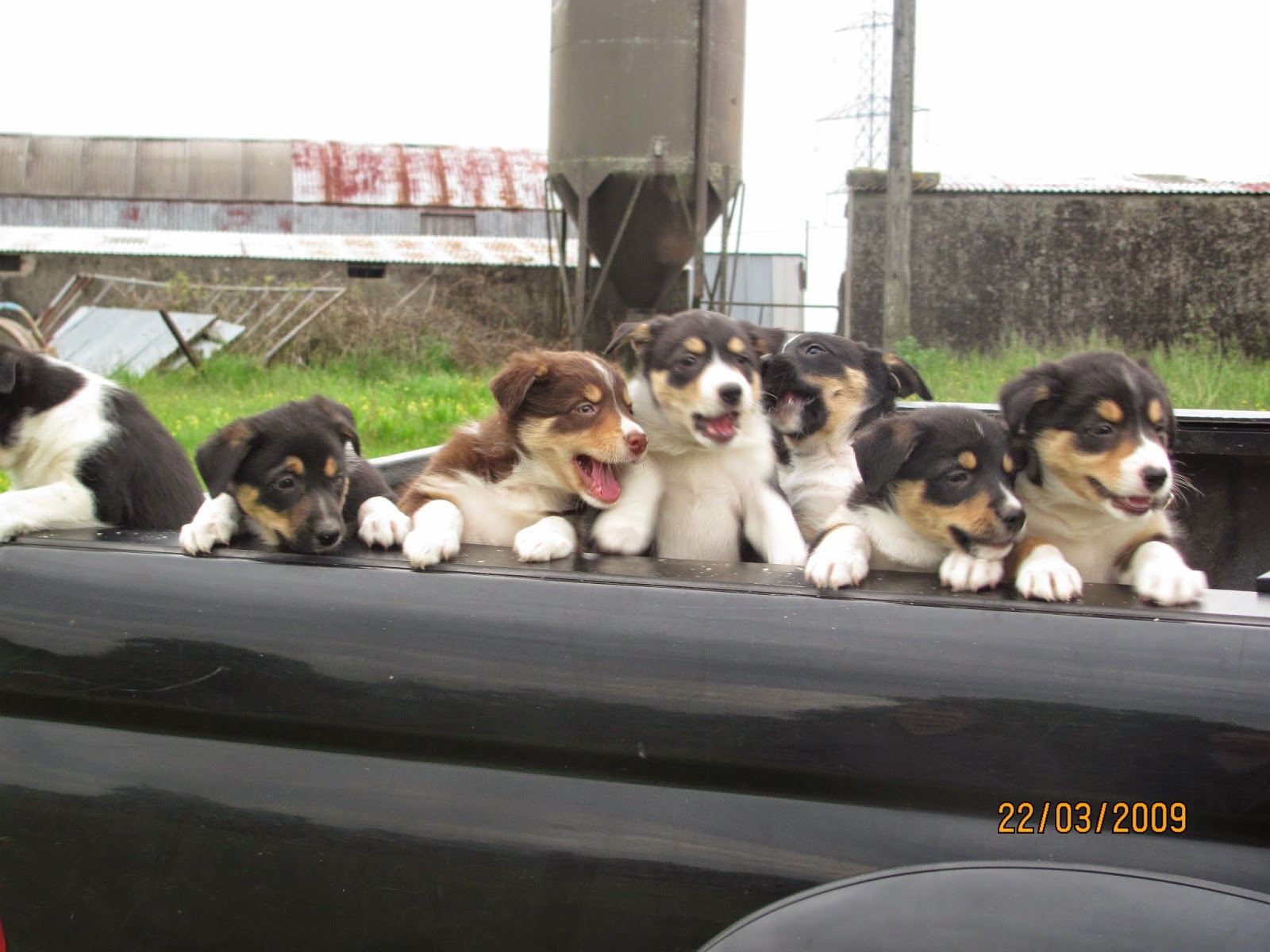 And finally lining up with some of his litter mates for a photo.  He's the little pup on the left.  Awww!

For more puppy pics check out this post from 2013: Introducing Finn My Collie Pup 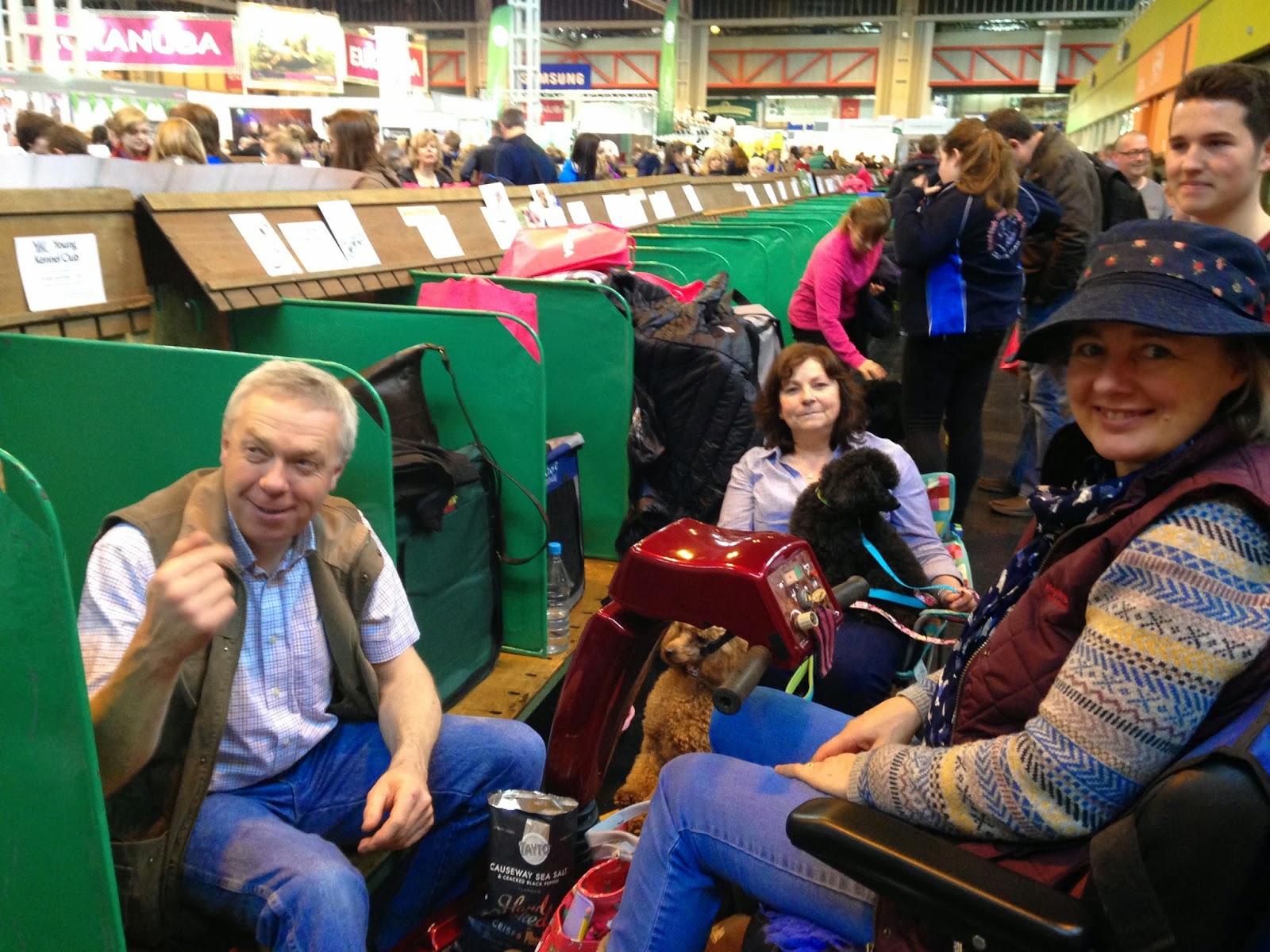 Standard seemed very high this year, with lots of clear rounds in super fast time.  Our team did great:

Clare and Taz in full flight: 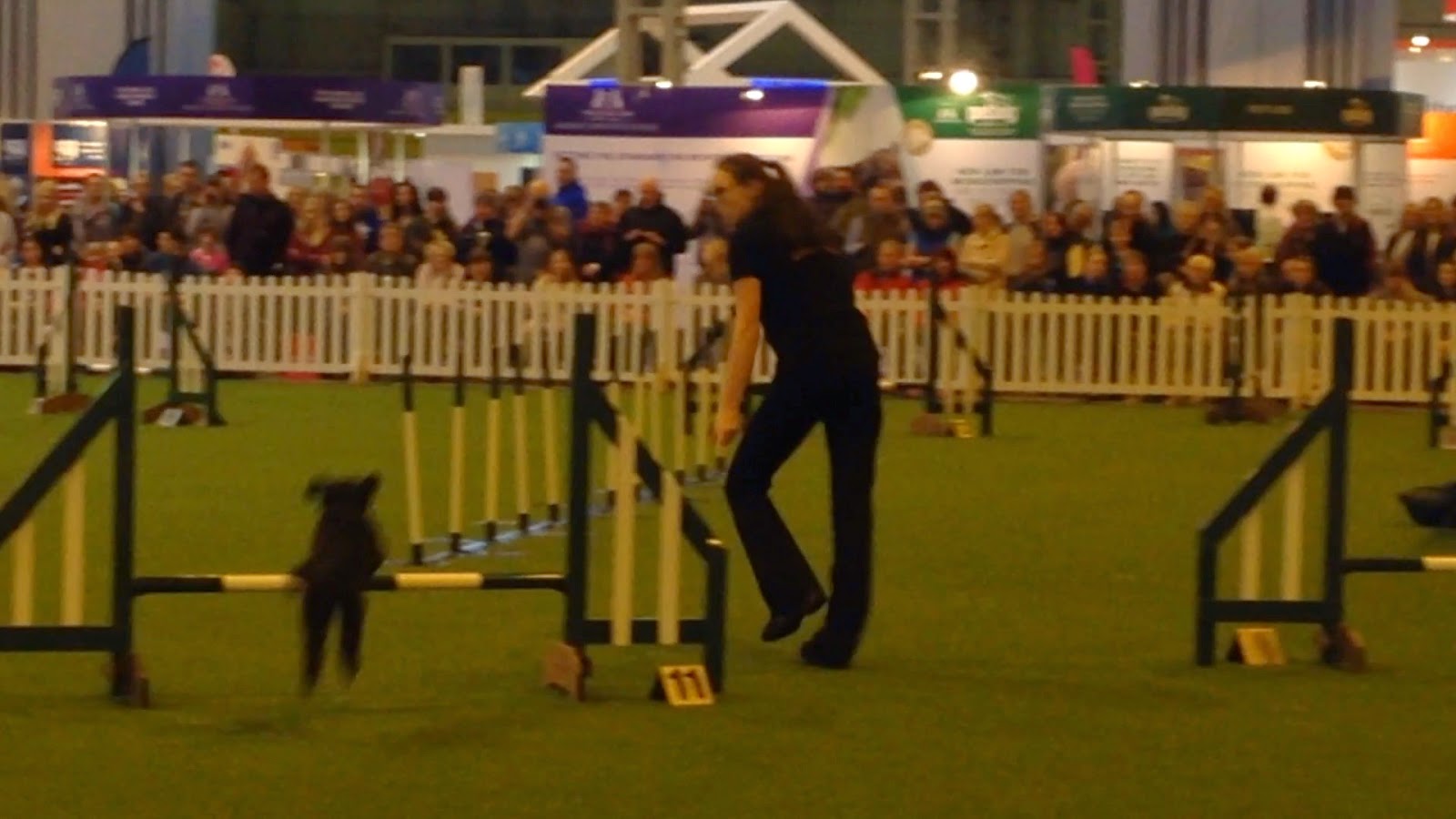 Becky and Miley took to the limelight in great style: 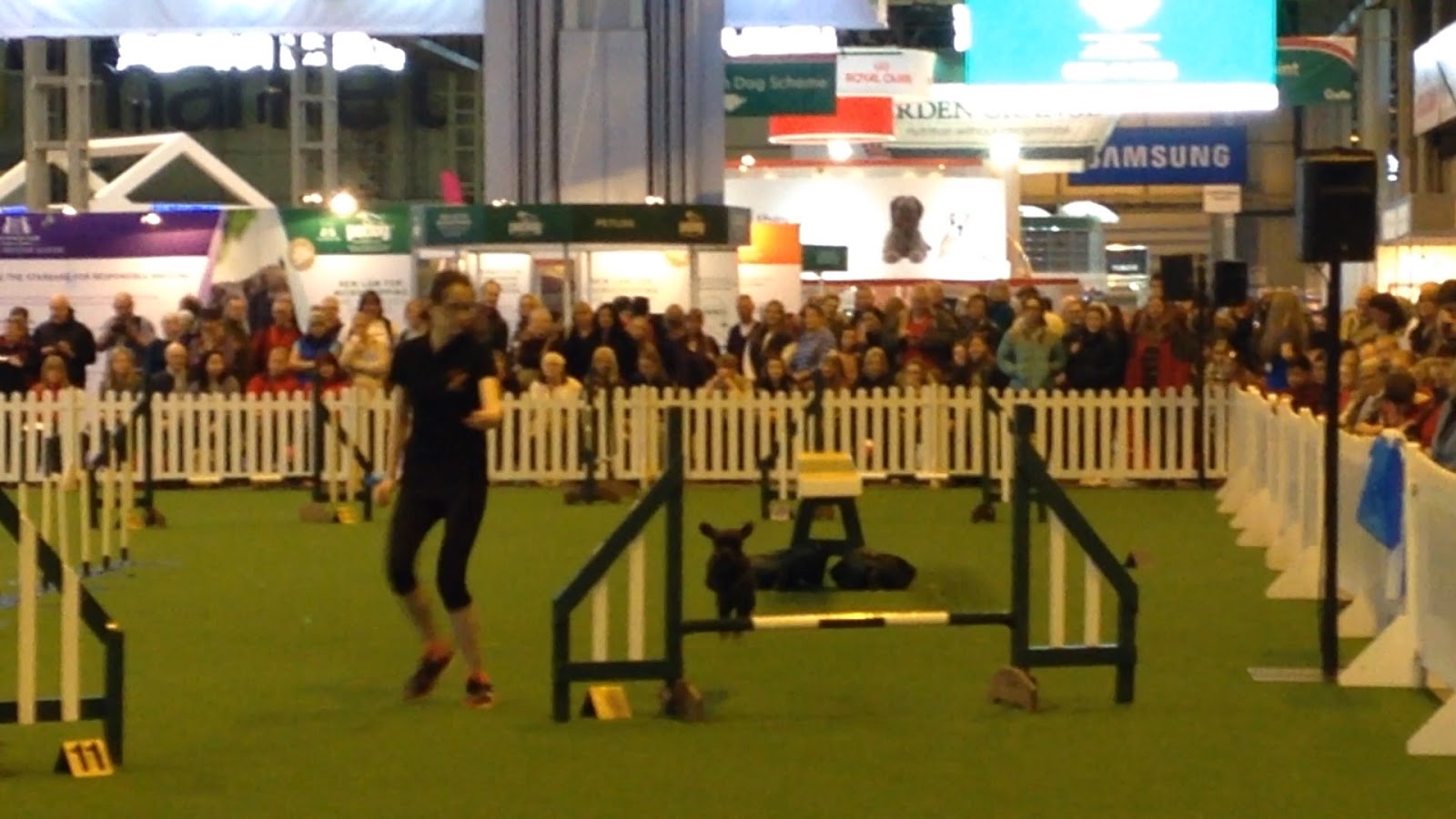 And yet another little black dog - Patsy with Shona: 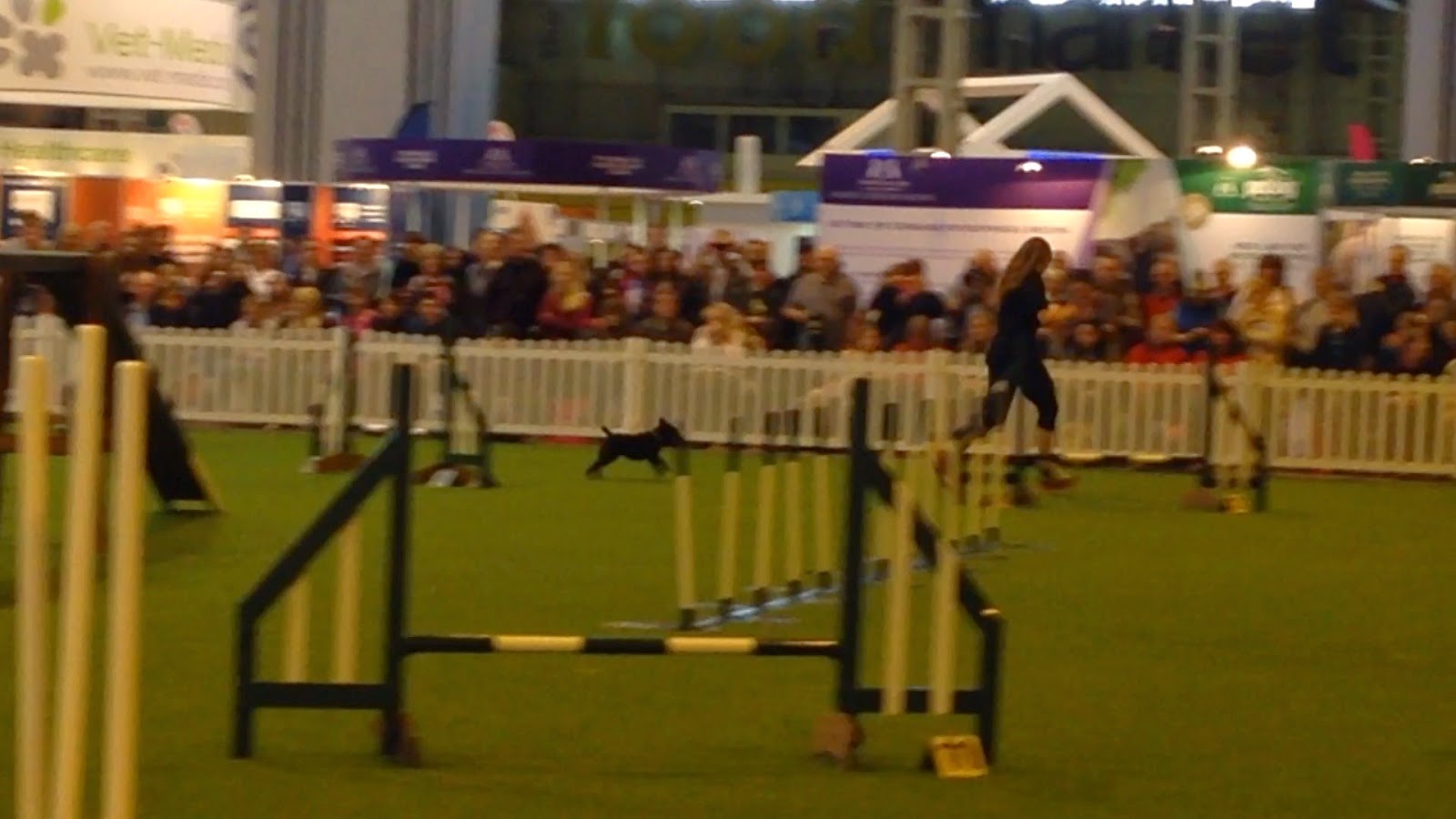 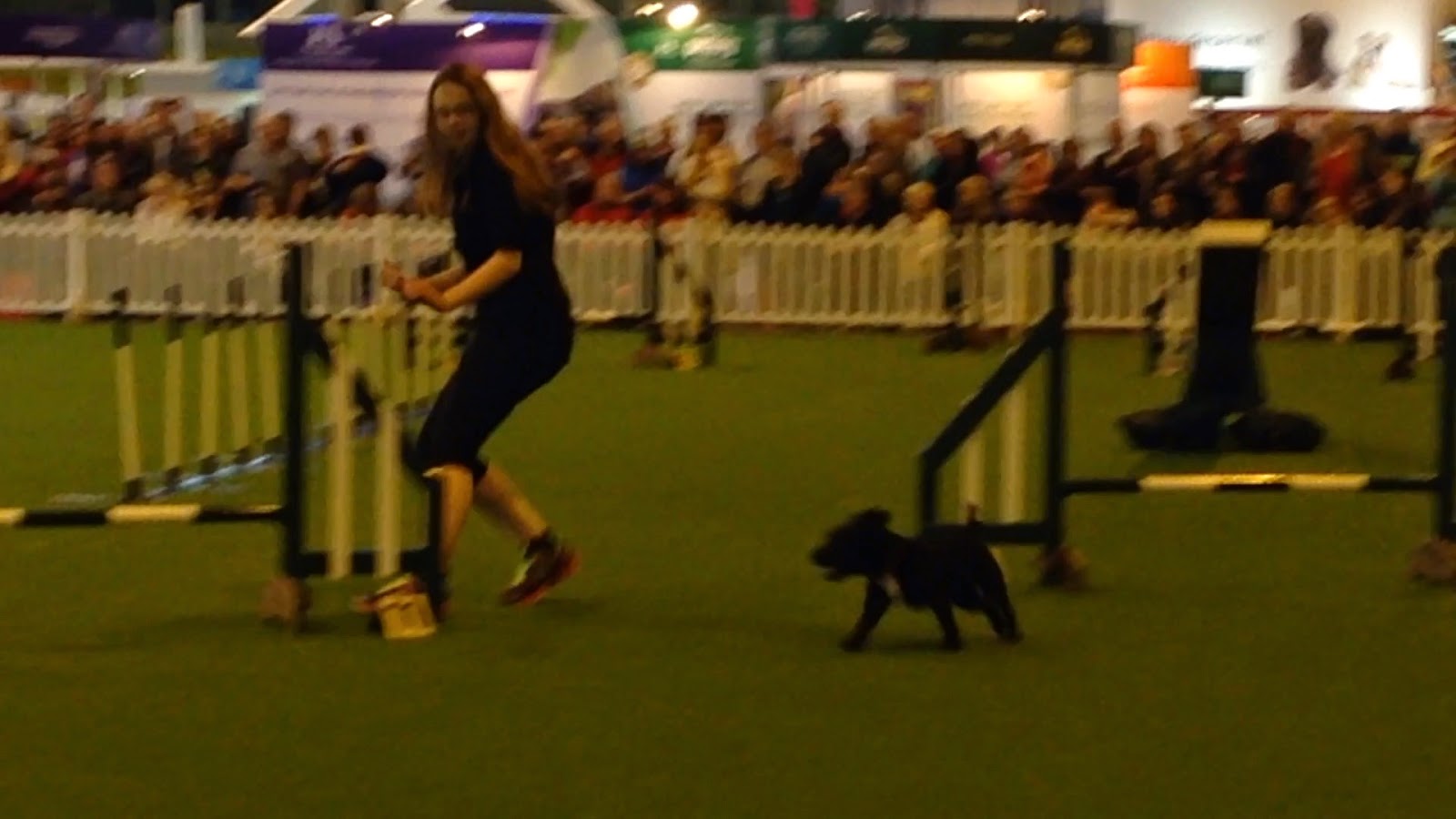 I did a little shopping...  new handbag, a slip lead for Finn, a mini bumbag thing and a Crazy Dog Lady hoodie!  :D 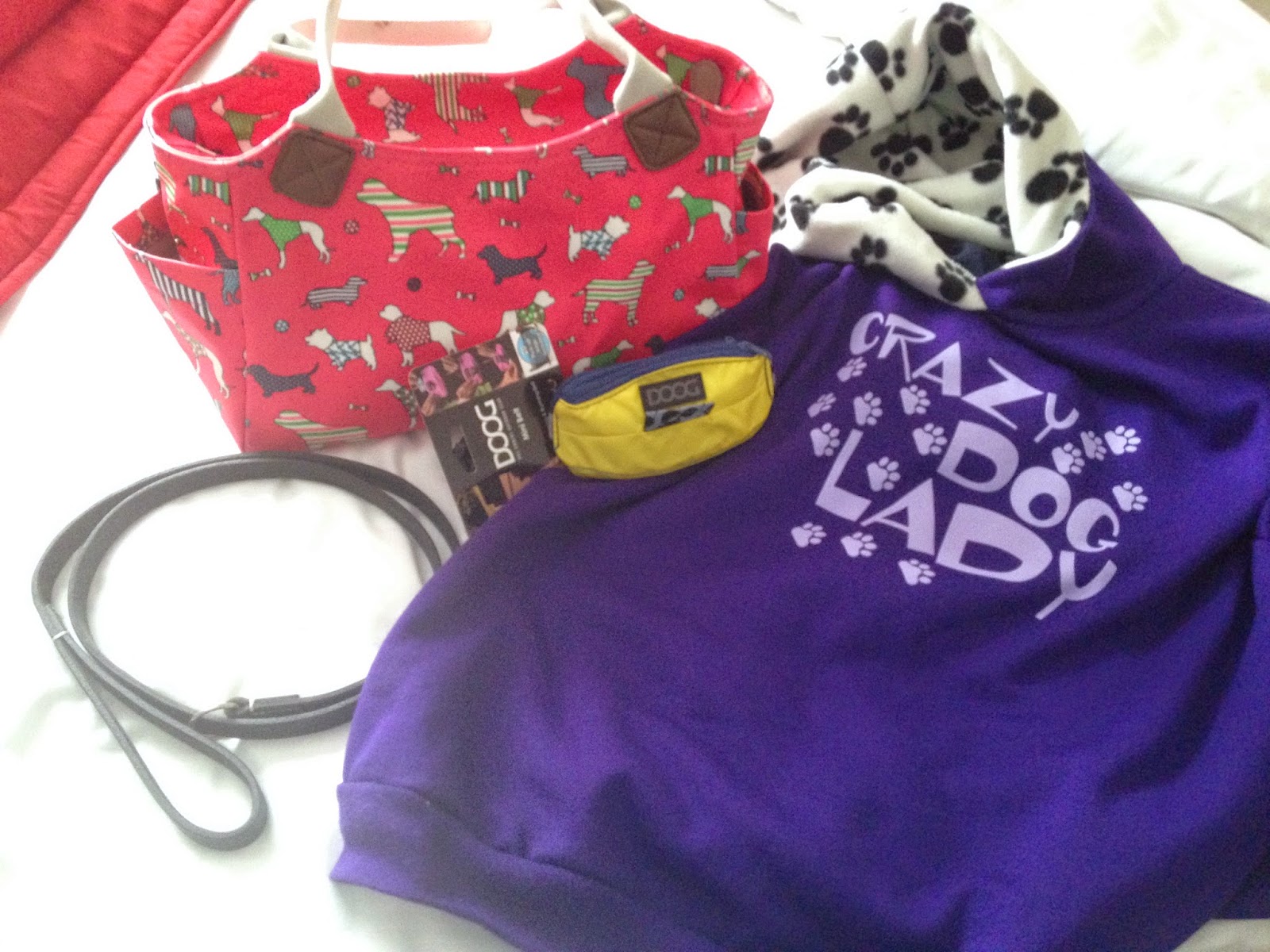 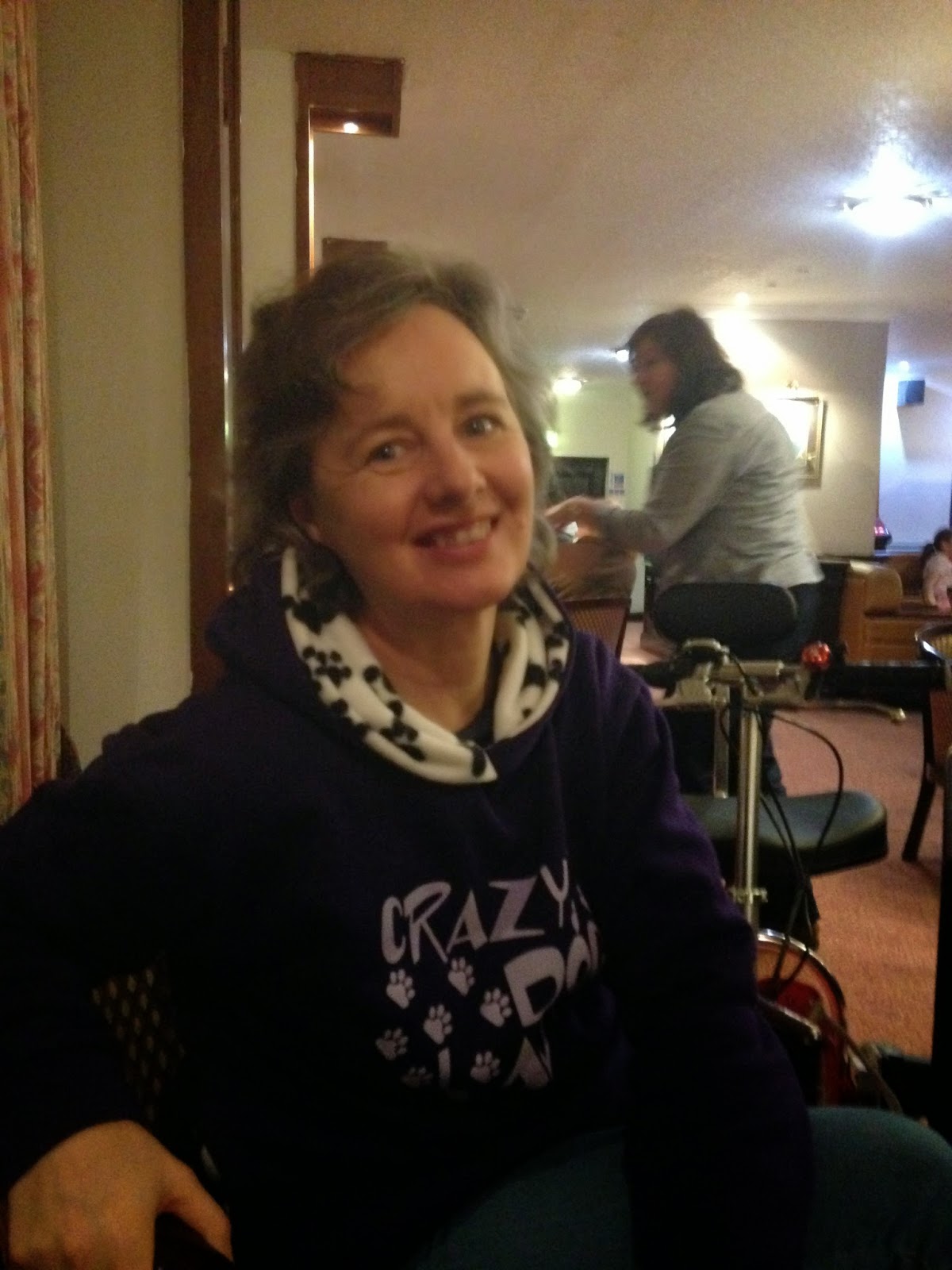 Leaving for CRUFTS this evening!

So we'll be on the overnight ferry to Liverpool this evening, and true to form everything is getting left to the last minute...

Including Patsy's haircut! So one pile of cheese treats later, and finally the little black sheep has got sheared ready for indoor competition:


Watch out Crufts we are on our way!!